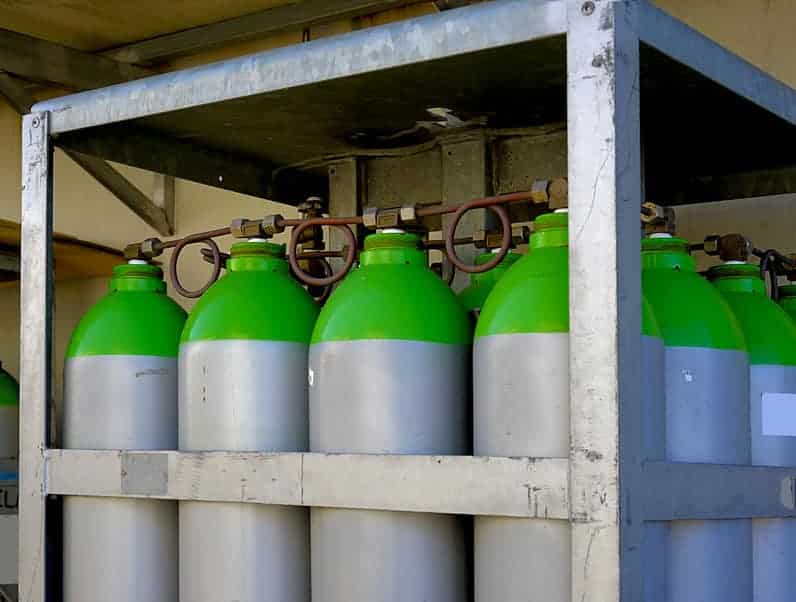 When it comes to purchasing Argon, I frequently hear the question about cheaper alternatives to Argon and why we have to use this expensive (noble) gas. If you are curious like me about the reasons why Argon is a staple in Gas Arc Welding and TIG welding, I collected six reasons below.

6 Reasons why Argon is used in TIG welding processes:

Before I go into the chemical and technical details, I will list the practical, everyday advantages of Argon in TIG welding and gas welding in general for that matter. And in the end, I will reveal why Argon is cheap considering.

Probably the best-known reason why Argon is used in TIG welding is the protective effect an Argon gas shield has on the weld. The Argon is flowing through the torch nozzle and creates an “umbrella” of gas around the molten weld puddle. This shield ideally displaces all air around the focus zone and prevents the formation of oxides. Oxides develop when various materials react with Oxygen.

For TIG welding, one risk is the formation of Tungsten oxides. This increases wear on your Tungsten electrode and increases the chance that Tungsten oxides will contaminate the weld. These oxides work like razor blades cast into a rubber band. As soon as the weld (or in this example the rubber band) is stretched or stressed in any way, the razor blades will cut through the material. Similarly, because the oxides are of superior hardness compared to the surrounding welding material, they will create cracks and weaken the joint strength significantly. These inclusions are highly undesirable and can be one reason why welds have to be completely removed. Or worse, joints fail critically.

Some materials are more sensitive when it comes to contamination. Hydrogen, water, air or oxygen react critically with corrosion-resistant metals, such as stainless steel. One of the effects caused by these impurities in the welding atmosphere can lead to defects such as decreased corrosion resistance, cracks, increased brittleness, carbide precipitation and generally an ugly looking weld with a lot of discolouration.

Hydrogen, water, air, oxygen, where do all these things come from? And the easy answer would be “everywhere.” Hydrogen can originate from a contaminated shielding gas source or being produced when water is introduced in the weld circulation. For example, through cooling leaks or a wet work environment. Hydrogen can also already be present in your workpiece. Hydrogen, chemical symbol H, can be found in repair jobs, especially when seen maritime service time. Also, some poorly produced steel can contain Hydrogen. If you can’t trust the source of your material and no reliable certification is available, use caution when welding.

And the third source of water/Hydrogen is regular air. Air transports humidity and Oxygen into an unprotected weld area and therefore needs to be kept out.

2. Argon can be blended with other gases

Argon comes not only in different purity grade (the higher, the better) but also in blends. First, an overview table on the most common combinations and the effects on TIG welding as a comparison. Afterwards, I will go into a bit more detail and mention a couple more exotic blends.

Helium (He): Helium, like Argon, is a so-called noble gas. Argon and Helium can, therefore coexist and are interchangeable in their base function of creating an inert shielding gas environment. Helium increases weld penetration compared to Argon, increases weld speed and is used for stainless steel or aluminium welding. The arc length becomes harder to control the more Helium is in the shielding gas and encourages spattering for steelworks.

Oxygen (O2): I just mentioned that Oxygen should be kept far away from the weld puddle to avoid the forming of harmful contaminants like oxides. But as with many medicinal ingredients, the dose makes the poison. In the case of Oxygen, up to 2% is added to the Argon for the release of extra chemical energy. The extra energy helps the deposition rate, which means it speeds up the welding process. As TIG welding is a slow welding process, O2 can be a way to tweak. Other positive effects on the welding process are increased arc stability. The surface tension of the weld puddle is reduced as well, which leads to better wetting of the weld area on the solid base material. Because of the oxidation process described above, Oxygen blended Argon is not used for Aluminium, Magnesium or copper.

Nitrogen (N): Too much Nitrogen causes porosity and brittleness and is undesirable in TIG welding. But similar to Oxygen, small amounts blended into the Argon gas lead to increased penetration of the base material and also enhances arc stability compared to pure Argon. When used for stainless steel, mechanical properties can be improved. For example, pitting corrosion resistance and prevention of Nitrogen loss in the metal.

Argon, chemical Ar, is a so-called inert gas, that means it does not react with any other element. Another name for inert gases is noble gases. The name derives from the direct German translation of “Edelgas”, which was coined by Hugo Erdmann in 1989 to indicate the extremely low level of reactivity. The term noble gas is more commonly used today than two other common labels are an inert gas or a rare gas. Also, rare gas is a misleading term, as Argon is the third most common gas in the earth’s atmosphere with close to 1% by volume. Looking at the periodic table, you would find them on the periodic table of elements on the very right edge. That means that their valence shell is full and therefore the element is (nearly) non-reactive.

3. Necessary for Striking an Arc

A welding arc consists of a lot of electrons moving between the electrode tip and the base material. The direction of travel depends on the polarity. At the start, the electrons create a plasma, also called the 4. state of matter, which reduces the friction the electrons encounter while travelling. This plasma is created by the electric energy input that releases gas energy.

Another effect welder avoids when TIG welding are annealing colours. These discolourations of the base material indicate that the metallurgy of the metal has changed. Why is that important? Important elements have either diffused or evaporated, which leaves the surrounding area of the welding joint unprotected against different forms of rust when welding stainless steels. To mitigate that, covering the backside of your weld with Argon can be quite advantageous for optimal results. Below is an overview of the available cleaning methods after welding stainless steel.

Argon can, therefore, help to speed up the cleaning process after welding. Not cleaning the weld afterwards is especially useful and commonly applied when welding tanks or pipe, where cleaning the backside is not or only very awkwardly accessible.

When you are welding CrNi steel or Ni alloys, using Argon to protect the back of your weld is worth the extra cost of additional Argon. If you want to dive deep into that topic or find the ideal protective gas for this application, I recommend EN ISO 14175 to see the guidelines for possible metal and gas combinations.

6. Cheap in comparison to the Alternatives

This answer varies a bit depending on where you are welding in the world. For example, the main Argon alternative, Helium, is way cheaper in America than in Europe due to the lack of natural sources. Helium in Europe is mostly extracted from the atmosphere, and therefore more expensive because Argon is more abundant. So generally speaking, Helium is more expensive than Argon. And both are cheap in comparison to the other noble gases.

And would not using a noble gas in TIG welding be an option? As I tried to point out in this article, TIG welding needs a well-protected, inert atmosphere for it to work well. Some more active gases might be ok for special applications, but in general, non-inert gases will damage your welding results.

The short answer is yes, but not in the way most dangerous gases are. Argon is not toxic, but much heavier than air. As a result, Argon will replace Oxygen over time. Replacing Oxygen is especially dangerous when welding in close quarters or containers. Dying of Argon suffocation is not uncommon and is sometimes referred to as “Argon drowning”. Always give the Argon a chance to “flow away” or use additional Oxygen supply when welding tanks, for example.

How many noble gases are in our atmosphere?

The three noble gases we all breath in daily are, sorted by there occurrence, Argon, Neon, Helium and Krypton. Combined, they make up around 1% of the earth atmosphere.

What does “Air” consist of?

Our breathing air consists mostly of the following gases: Nitrogen (78%), Oxygen (20%), Noble gases (1%), Carbon dioxide (0.03%) and Water vapour (0.97%). The relation obviously changes depending on your location and the measuring hight, but these are useful averages.

Other Industrial Applications Argon is used for these reasons:

Argon is used in all industries where a protective, nonreactive atmosphere is desired, and the worth of the product can compensate for the increase in process cost. For example, the Semiconductor Industry is using Argon for growing crystals, such as Germanium. Or nonreactive blankets from Titanium are produced in such a protective environment.