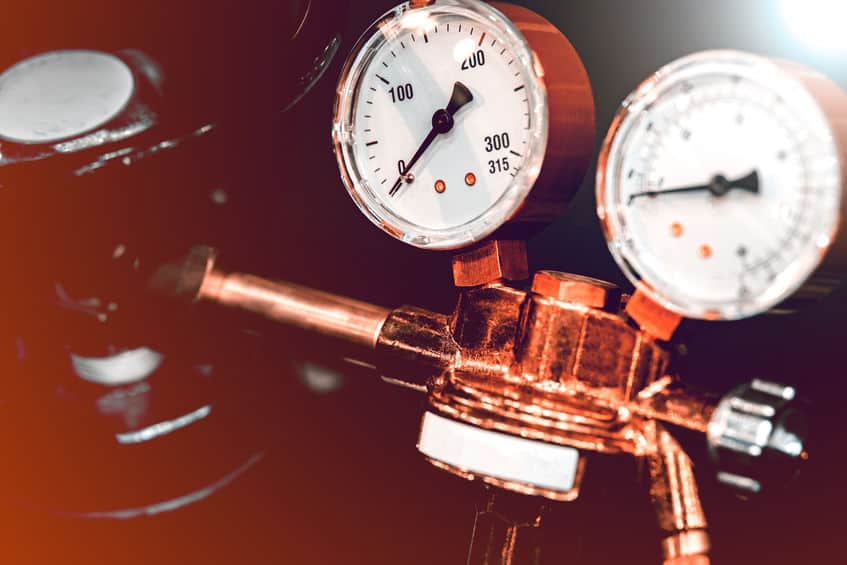 TIG welding is one of the most popular processes out there. When starting to learn how to weld using this process, questions about gas pressure and flow rate are bound to come up. Welding is dangerous, so itâ€™s normal to want to make sure that everything is done perfectly. In the case of argon pressure, though, numeric perfection isnâ€™t entirely realistic.

What Pressure Should Argon Be for TIG Welding? From what we know, argon pressure for TIG is not clear cut. There are not a lot of answers for what the average pressure should be while TIG welding. Instead, most of the answers focus on the flow rate, which falls somewhere around 40 cfh.

This doesnâ€™t answer the question directly because welders donâ€™t really seem to think that a direct answer is necessary. To understand why this is the case, we need to understand the relationship between pressure, flow rate, and TIG welding a bit more.

What is TIG welding?

TIG welding, or Tungsten inert gas welding, is done using tungsten electrodes and shielding gas. The shielding gas protects the electrode from oxidation or any other outside contamination.

TIG is a more difficult process to master than most other welds, but it usually produces a much stronger weld. TIG also gives the welder much more control, which helps increase the quality of the weld.

While it is most prominently used on aluminum, TIG welding can be used on my every kind of metal. This makes it an incredibly versatile method in comparison to others with more limitations. This process of welding, however, can be more expensive due to its slower time.

There are similar processes that relate to this, such as MIG welding, which weâ€™ll be touching on in just a bit. For now, just know that TIG welding is primarily used as a method that joins metals together.

It is important to make sure that you are using the proper gas for each kind of welding. TIG should not be used with gases that are not suited for this job.

There are a few different types of gases that work with TIG welding.

Helium is a commonly used inert gas. The use of helium gas in welding can increase speeds significantly, but there is a catch. While the process is faster using helium gas, the welder has less control. This usually leads to a lower quality weld.

Argon is the most common gas used in TIG welding. It is an inert gas that creates a more controlled weld. Using argon gas basically guarantees a quality weld, but it does slow down the process. The lower speed will probably increase the cost of the project, which should be kept in mind. When it comes to TIG, you get what you pay for.

Argon-hydrogen is a mix of inert and active gases, that can yield the quality of argon with the speed of helium. While this might sound like the best of both worlds, the hydrogen in this mix can lend itself to a more porous weld. Pores in a weld can decrease the strength of the joint, due to a lack of metal where there was an air bubble.

After reading the above descriptions, you may be wondering why these gases were described as either â€œactiveâ€ or â€œinertâ€. This is an important distinction to make when talking about shielding gases.

Inert gases, like argon, do not affect the welding process. While they protect the weld from oxidation, these gases do not interact with anything else.

Active gases, like hydrogen and oxygen, do affect the weld. These gases can cause metal to be more easily formable or make penetration of a weld increase. Unfortunately, the ease of power use with active gases makes for a much less controlled environment.

This means that as far as shield gases go, active gases are more likely to cause burning and pores in a weld. This decreases the quality overall, which is why most welders stick with argon for TIG welding.

The question of what exact amount of argon pressure should be used during TIG welding is really tricky. Most welders are going to be much more concerned with the argon flow rate.

While reading about this, itâ€™s easy to make the mistake of assuming that flow and pressure are the same thing. This, of course, isnâ€™t exactly the case. While pressure and flow work hand-in-hand, they have different purposes in the welding process.

When asking the question of argon pressure, most welders reply with the only answer that they can think of, which is the argon flow rate. The average flow rate for TIG welding seems to be 35 to 50 cfh.

Dependent on the argon flow rate, the pressure can be determined. It is important to keep in mind that the flow rate and pressure go hand in hand in this instance .

For the most part, no definitive answer has been found. Not many welders are asking this question, let alone answering it. So, we only have speculation currently. This may be a bit of a disappointment for many, but there is heavy research going into this as of now, so hopefully, we can have more of a concrete answer sometime in the near future.

After some digging, though, it seems that a few welders have said that their average argon pressure for TIG welding is around 20 to 30 psi.

Again, this should be dependent on the flow rate, which seems to be much more important to manage than the pressure. So, I would not recommend getting too caught up in these specific numbers.

Another popular method that is commonly used in welding is known as MIG. There are certain times where you should be using both, and it just depends on what will work best in any given situation.

Although different, they do have some similarities to one another. One of the biggest similarities youâ€™ll find between these two welding methods is the fact that they both use an inert gas.

However, there are some differences as well, though. One of the largest is that MIG welding tends to favor a continuous wire which in turn can be a filler as well, while TIG relies on a tungsten electrode, which is considered a non-consumable as well.

This means that usually, MIG is the more effective method when it comes to dealing with thicker material. This is a good note to keep in mind if you are trying to figure out exactly which welding method will work best for your project.

There is quite the debate out there that argues that MIG is better than TIG and vice versa. Although MIG is more diverse as to what it can accomplish, I personally believe that both methods have their own set of benefits.

If MIG was clearly better in all categories, then we wouldnâ€™t see TIG welding be used anymore, and the fact that both methods are popular today supports that there is some good in both areas.

However, I will say though, MIG does have several benefits and edges over TIG welding, but again, it all depends on the project you are tackling and what your end goal is.

Also, when it comes to price, typically MIG parts are cheaper, and they are easier to find as well, which is a large reason that I believe MIG is becoming the more preferred method. However, as I said, there are some differences between the two processes, so I donâ€™t see one welding method taking over the other entirely, at least for now.

If you are looking for what the argon pressure should be for a TIG weld, the best thing to do is to learn every other part of the welding process. Argon pressure is far from the most important part of welding, and it is almost entirely dependent on the flow rate. Make sure that you have a good Argon regulator that will allow you to precisely set your Argon flow rate.

When doing something as dangerous as welding, it is absolutely important to do everything correctly. But exact numbers arenâ€™t going to be necessary for every piece of the process. Just make sure that youâ€™re following each step as closely as possible and you will eventually master TIG welding.

“This site is operated by Darn Good Investments, Inc. WeldingMastermind.com is a participant in the Amazon Services LLC Associates Program, an affiliate advertising program designed to provide a means for sites to earn advertising fees by advertising and linking to Amazon.com. This site also participates in affiliate programs with other sites. Weldingmastermind.com is compensated for referring traffic and business to these companies.”

“This site is operated by Darn Good Investments, Inc. WeldingMastermind.com is a participant in the Amazon Services LLC Associates Program, an affiliate advertising program designed to provide a means for sites to earn advertising fees by advertising and linking to Amazon.com. This site also participates in affiliate programs with other sites. Weldingmastermind.com is compensated for referring traffic and business to these companies.”