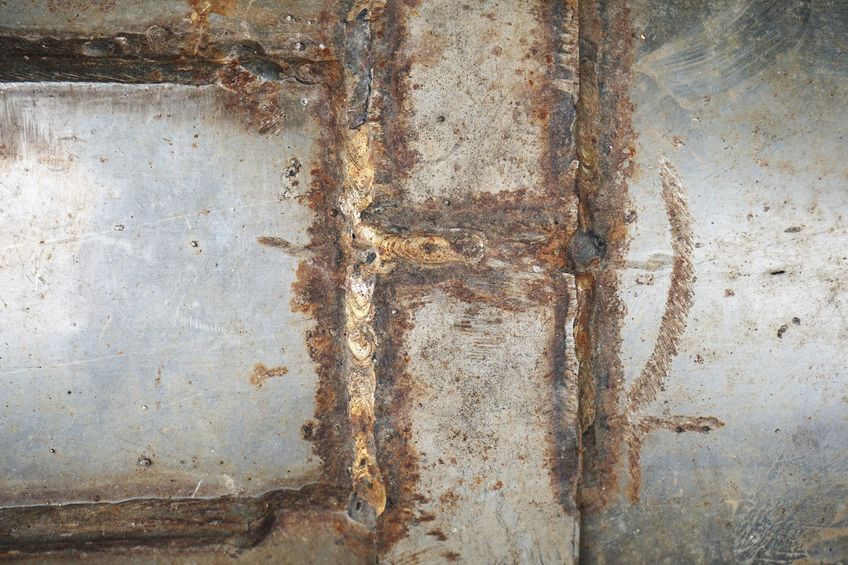 A common problem welders face after a welding project is the formation of rust on the weld site. However, some professional welders believe that using an alternative type of welding, such as Tungsten Inert Gas (TIG) welding (also known as Gas Tungsten Arc Welding) can help prevent rusting from occurring altogether.

Does TIG weld rust? TIG welding can help reduce the chances of rust formation, but there is no way to completely avoid rust from forming on any weld.

Tungsten Inert Gas (TIG) welding is a more modern arc welding process that involves using a non-consumable tungsten electrode to fill and fuse metals. TIG welding offers many benefits compared to other methods of welding—including reducing the chances of rust formation on the weld site.

Rust forms as a result of certain metals being exposed to both oxygen and water for some time. The chemical process of metal atoms combining with the molecules in oxygen and water is known as oxidation.

However, even without the presence of water, metals can still rust; this is because there is already moisture in the air we breathe. According to Julie Richards from Sciencing, there is enough hydrogen and oxygen in the air (H20 = water) to allow the bonding process between these atoms and iron and steel atoms to occur.

Typically, the only metals that can rust are steel and iron; other metals eventually become corroded but do not produce the rusting effect that is more visible in steel and iron.

Why Do Welds Rust?

Many welders will find that a project they work on will accumulate rust on the welded portion, while the rest of the metal framework is entirely rust-free. Some may attribute this to poor welding (and poor welding ability in part of the welder), but there are legitimate reasons why welds end up this way.

The welding material you use could be composed of a slightly different alloy from your base. When this happens, you can create a net galvanic action—think of it as a weak laptop battery being charged with a lower-amp charger than what’s needed. The weld can begin to rust as its being applied. This rusting is more common when you weld brass to copper.

If the metal had an anti-corrosion treatment applied to it before welding, then it is also possible that the heat from the welding process burned it off.

In addition, if you clean a metal welded surface with a strong chemical cleaner, it is possible for the metal to become corroded due to the chemical reaction between the cleaner and the metal.

Because steel is a carbon iron alloy, then the heat from welding can interfere with the temper. The carbon molecules will eventually begin to clump together as more heat is added. The surface of these clumps is where rust will typically begin to form.

Another factor to consider is how much heat stress the metal you’re working with can take. For example, areas with more significant welds will corrode faster than areas of smaller welds.

Two metal pieces welded together may appear like they’re in full contact with the filler material used, but there are usually tiny crevices that exist between them. Moisture eventually finds its way in these small crevices to cause early oxidation.

Of course, there is also a scientific explanation as to why welds tend to rust, and often first, on metal pieces. When you begin the welding process, the area of the weld metal receiving heat releases hydrogen into the air. This hydrogen interacts with the oxygen and moisture in the air, creating an early oxidation effect.

How Does TIG Welding Prevent Rust?

TIG welding does not utilize a consumable wire like other types of welding such as MIG (Metal Inert Gas). Instead, it uses increased heat to trigger a bonding effect between two metals. Because another metal is not involved via a metal filler, there is less of a possibility for a chemical reaction or oxidation to occur.

In addition, TIG welding involves using a gas shielding (usually argon or an argon-carbon dioxide mixture) during application that protects the heated metal from any contamination.

What Types of Metal Does TIG Weld?

Although it is more commonly used with aluminum or steel, TIG welding can be used to join almost any metal, including titanium, nickel, aluminum, copper, and stainless steel.

What is TIG Welding Best Used For?

TIG welding is ideal for making more complicated welds, such as welding round objects or having to make S-curves. It is also mostly used for electrically-resistant metal, like aluminum; highly ductile metals will take more time to heat up, and therefore less efficient to use TIG weld with.

Why Choose TIG Over MIG Welding?

One thing that separates TIG welds from other types of welding is how the arc is created in addition to how the filler metal is added (or in this case lack of filler metal required).

The following table shows the major differences and similarities between TIG and MIG welding:

Because TIG welding allows the welder to join two metals together directly, there is less of a chance to leave room for moisture to get in since there is not an overlapping weld holding the two objects together.

Because rust cannot be stopped from affecting metals and their welds, there are some things you can do besides using a different weld technique to help prevent rust formation:

Rather than have overlapping welds create crevices for moisture to get in, you can either use a TIG welding technique or use a butt weld. A butt weld will eliminate the possibility of overlapping sections, and many storage tanks come with butt welds already.

The point where your weld overlaps will likely have two sides to it—sometimes four in some cases. What a seal weld does is overlap the seal areas. Think of it as if you’re taping the bottom of a box closed: you don’t want to use a single piece of tape to seal it, because it may not hold the box closed as you add more weight inside and start to move the box around. You instead would tape multiple pieces of tape across the sealing point that overlap to make the seal stronger.

It is certainly possible to use caulk to fill in the gaps between metal plates. This will help prevent rust by sealing out moisture. However, think about your plans for using a finisher on your metal weld; paint usually interacts with the ingredients in caulk.

This primer is a zinc-based paint that can be applied over the overlap area. The zinc begins to melt as the weld is made and ends up coating both surfaces with a corrosion-resistant metal.

Rust is an inevitable occurrence, especially in metals exposed to moisture over time. TIG welding is one technique that cannot exactly eliminate rust formation or the chances of it happening but can, at the very least, slow the process from happening for a while.

And, although TIG welding requires more training and effort, it is certainly worth using for a beautiful, high-quality weld outcome!

link to 7 Tips for How to MIG Weld Aluminium

Countless questions have reached me about Aluminium welding. I compiled 11 Tips for TIG welding Aluminium in a previous article. However, getting an extra machine or learning an additional process...

Continue Reading
link to Is Welding a Good Career? 6 Reasons You Should NOT Become a Welder

College tuition prices continue to trend upward, and many young people are considering alternatives to the traditional college route. As trade schools become a more popular option, many people are...