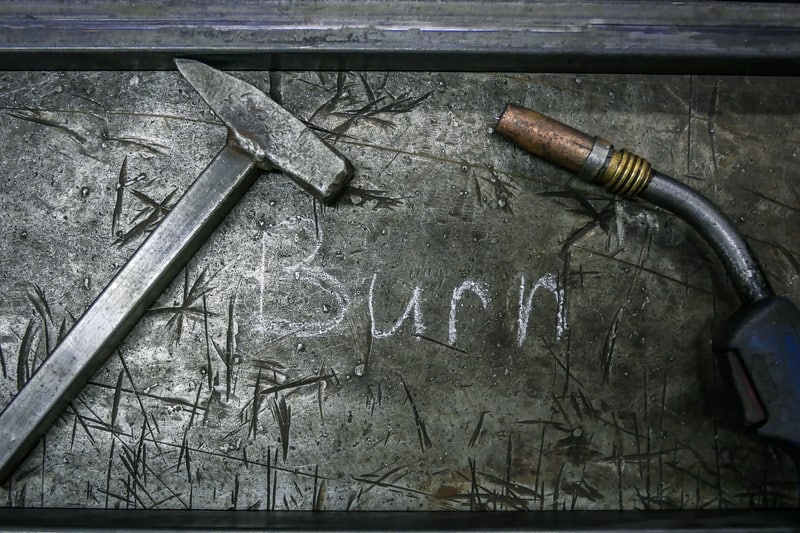 A question that reached me recently sparked my curiosity, as I was not familiar with the term “Hammer Welding”. Furthermore, there are two interpretations running around, which both describe different processes. This post hopefully clears up the terminology and origin of “hammer welding”. Next time there is an argument in your body shop, you can refer to this article ;).

Hammer welding is a term used for two different processes: In body shops, hammer welding describes the flattening of a weld after welding a tack weld or a weld joint while still hot to flatten and release tension. Another use of the term is used to describe forging metal with a hammer in blacksmithing.

As always, there is more to the story. If you like to get more firepower for your next discussion in the body shop, I will go into more detail below.

Using hammer welding as a term in sheet metal welding might cause some debate now. To be precise, the hammer does not weld in this context but flattens the weld seam that is welded by oxygen flame welding. This has two main advantages: The first effect is, that the weld joint height is flattened. And the second effect is that the tension caused by the shrinkage while cooling down in the metal sheet is, to an extend, countered.

So how does hammer welding look like in sheet metal welding or automotive body repairs?

To observe a master at work, see this video of Gene Winfield welding on the roof of a car at the World of Wheels Car Show. Notice that he uses a counter weight, sometimes called dolly, to prevent bending the metal, but forcing it to stretch into the x-y-axis (which flattens the sheet surface flatten).

Can you do Hammer Welding with TIG and MIG welding?

The main reason why hammering works so well in oxygen fuel welding is that the weld and the surrounding area are still glowing hot. Oxygen welding has a high and broad heat input. Hammering on a glowing hot weld is the key factor for not harming the metallurgy of the weld. Undesirable outcomes would be cracks.

So the question is now, does hammering also work for TIG and MIG welding? And the answer would be yes, but… Key factors for success are:

I know hammering is done, and it might be alright in your case. There are too many parameters to generally say it’s impossible. However, I would not recommend it based on my metallurgy and field knowledge.

Where does the term Hammer Welding come from?

Hammer welding was a very common process a couple of decades ago. While the process is quite time-consuming compared to current methods, the process is not very invasive. That means that the car body or metal sheet would ideally not being distorted after the weld joint had been placed. Also, very few if any lead or other filler material would have been necessary.

Can You Actually Weld with a Hammer?

Question is, would it be possible for you to “weld” pieces of metal together just with a hammer? And the answer is “yes”:

You can weld with a hammer. By heating up the base metal to forging temperature, two metals can be welded together with the hits of a hammer. The mechanical energy from the hammer closes the distance between the electrodes of both workpieces so that both pieces become metallurgically one.

A great example of Scoop Science to show how little is necessary to replicate the process. In a more professional environment, heat management (as he also noted in the video) would be quite important. And also cleaning the surfaces before joining not only helps the process but also prevents contamination.

Hope this cleared up the confusion. Both interpretations of hammer welding are still used, however without context, it might lead to confusion. Technically only the term hammer welding used in blacksmithing is an actual welding process.