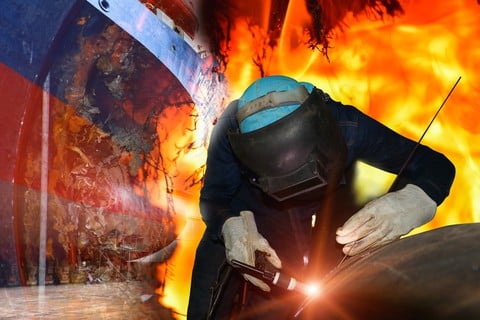 TIG welding is becoming a more popular hobby, and more people are undertaking it at home, either in garages or basements. But if you TIG weld in a basement, there are some crucial facts you need to know to stay safe.

What do you need to know if you’re TIG welding in a basement? TIG welding involves several health risks when used within a closed space in the home, such as the following:


With proper ventilation and fire prevention, TIG welding can be undertaken safely. Read on to find out more about the risks of this kind of welding in an enclosed space and what you can do to prevent a tragedy.

What Is TIG Welding, and What Are the Risks Involved?


TIG welding is welding that is performed with a non-consumable tungsten electrode creating the weld. To shield the weld area and electrode from contact with Oxygen or other elements of the ambient air, Argon is typically used.

Argon in TIG Welding Does Not Support Life

The danger of using an oxygen-shielding gas in a small enclosed space is that inert gases are not toxic to people. However, the shielding gas, Argon, in the case of TIG welding, will displace ambient Oxygen. Therefore you need proper extraction or ventilation in the room you are welding. Argon suffocation is a common threat that close quarter welders have to keep in mind. That’s why they generally use Oxygen supplied suits to keep them safe.

This can cause death in the welder due to lack of Oxygen. If the lack of Oxygen causes the welder to pass out in the family basement, argon levels may become fatal before anyone realizes that something has gone wrong.


Breathing in large concentrations of Argon can result in the following symptoms:


Suffocation from Argon can happen because once the brain is deprived of enough Oxygen, it limits the brain’s ability to reason, which may interfere with the welder being able to perceive that they are in physical danger.

Continued oxygen deprivation will cause a lapse in judgment, significant confusion, and can eventually cause the welder to blackout. If no one else is home and the welder is down in a basement alone, no one will know that anything is wrong.

When the brain is deprived of Oxygen, coma and death can occur in a matter of minutes, with no warning signs.


As much as the Argon is used in the weld, you also have to worry about any off-gases that are being generated from the process of TIG welding.

While the amount of fumes put off by TIG welding in comparison to some processes is relatively low, it’s still important to be aware of the danger and what kind of fumes might potentially be put off by the work you’re doing.

These heated poisonous fumes rise in the air, so without proper ventilation, they can rise into the home above the basement and harm those living above.

Welding in a Basement is a Fire Hazard

Just because a person has designated their basement as a “shop area” does not mean that it is a safe place to weld.

Basements are often cluttered home areas, like garages, and even though welders should know better, they often leave the following flammable materials lying around in the workshop. These materials include things like the following:

If a welder has any real sense of fire safety, they would never dare strike an arc in a workshop like this. The danger of a fire in the basement is that it is beneath the house, so it can quickly spread fire to sleeping areas and other living areas of the home.

If a fire starts in a basement while the welder is present, if it starts near the exit of the basement and that is the only basement a person can fit out of, this traps the welder in their fire.

Electrocution is Also a Danger with TIG Welders

Some TIG welders run on extremely high amperage, ranging from 200 amps (low) to 600 amps (high). To put this in perspective in the home environment, most residential electrical outlets only support 15 to 20 amps of power.


Not only will a TIG welder likely require special electrical wiring (that should be installed by competent professionals, not a do-it-yourselfer), these levels of voltage are much more likely to cause electrocution and death if encountered by a layman.

This is not like getting a small shock from a faulty home outlet; this is the kind of shock that instantly kills you or knocks you out of your shoes. So while welding is a fun and satisfying hobby, it’s crucial to treat it with respect it deserves.

Ways to Prevent Danger while TIG Welding in a Basement

While it can be significantly dangerous to TIG weld in a residential basement area, certain precautions can be taken to reduce or mitigate the risks of doing so. Welding is already a dangerous undertaking, but doing it in a small enclosed space beneath a home doubles the risk.

When using an oxygen-shielding gas such as Argon, it’s important to make sure the basement is properly ventilated so that argon levels do not rise to the point that they displace too much Oxygen in the room to breathe.

Some people might think, “Well, why not get a supplemental oxygen mask if it’s that large of a concern?” and the answer to that is because Oxygen and fire don’t mix. One misplaced spark around an oxygen tank could cause an explosion or raging fire.

The smarter course of action is to install strong fans that will push argon-laden air out of the basement and bring fresh oxygenated air from outside back into the room. This will also help to push out off-gassed fumes that would otherwise rise straight up into the home.

Like any area where high-heat electrical tools are used, TIG welding workshops in basements should be kept immaculate. Do not allow the accumulation of flammable materials around a TIG welding station, like a fire in a basement is one of the most dangerous areas of the home.

At the very least, you should install one or more high-quality fire extinguishers in the basement in case of an outbreak of fire, and also install smoke detectors throughout the rest of the home. If you’re going to be doing a lot of welding, you might consider installing a sprinkler system.


Be sure to test the batteries in your smoke detectors regularly and read the instructions on the extinguisher, so you know how to use it. These steps will make TIG welding in the basement much less likely to cause a deadly fire.

When wiring a TIG welder into your basement, be sure that the electrical connections are built out by an electrician who knows how to lay wiring for high-voltage tools. Unless you are very experienced in electrical work, it is not recommended to wire up a project like this by yourself.

TIG welding equipment should only be installed by people who are qualified to install it, and it should be tested thoroughly before being put to practical use.

Never remove the paneling from a welding power source if it stops working. Touching the interior of the welding set while the power is still live can result in a dangerous shock. When welding is completed, make sure your welding kit is put up in such a way that it cannot be accidentally switched on.