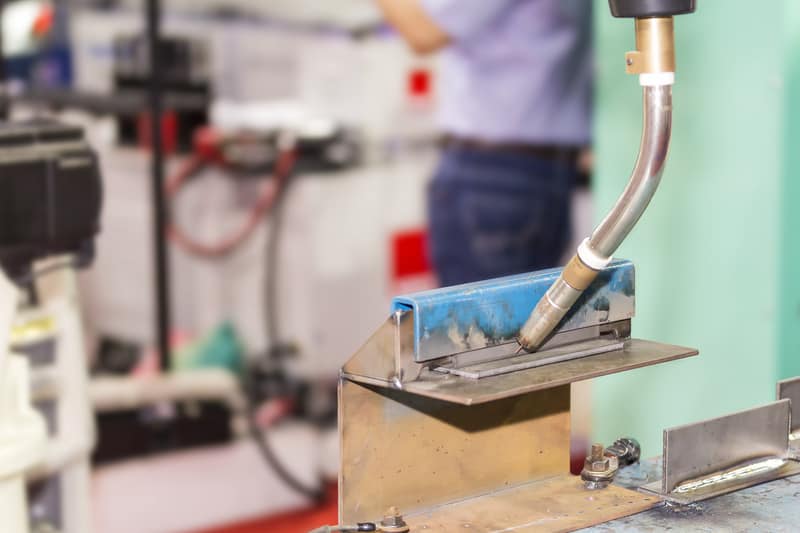 There are two directions an individual can move when MIG welding: in the direction of weld travel or against it. This is known as forehand welding and backhand welding, respectively. Both are essential to creating quality and long-lasting joints for a variety of metal types and thicknesses.

Both forehand and backhand welding are founded on three general rules regarding weld application, angle, and direction. When followed, these rules create a consistent weld technique that produce specific and reliable results.

Forehand and backhand MIG welding have similarities and differences, in addition to specific strengths and weaknesses. As such, welders should carefully select a method to best suit each individual job, rather than unilaterally applying one method to all work.

The quality of the joint depends almost entirely on the skill of the welder rather than the welding method used. Because of this, it’s important for welders to understand the two different techniques, their rules, and tips on how to create superior work.

Forehand welds are particularly useful for weld joints (as long as overheating isn’t an issue), whereas backhand welds are reserved for thicker metals.

Both of these types of welding allow welders to control the weld shape and penetration pattern, both key components of a successful and strong weld.

Forehand welding is the most popular of the two methods by far. In this technique, the MIG gun points in the direction of travel and moves toward it. The welder pushes the puddle and keeps the arc slightly ahead of it.

General rules for this method, also known as push welding, are as follows:

Keep in mind, these rules are not absolute and can change depending on specific circumstances.

For example, welders generally move from right to left. But some may have different preferences, a disability, etc. that necessitates moving from left to right, in which case the weld would move in the direction of travel.

Similarly, a weld may require an angle other than 30 degrees. Some forehand welding falls anywhere within an angle range of five to 35 degrees.

What are the Benefits of Forehand Welding?

Benefits of forehand welding include:

This method of welding is particularly useful for sheet metal and plate up to 3.0 mm/ 1/8 in. without edge preparation. However, forehand welding is also used for thicker metals, such as pipes up to 9.5 mm/ 3/8 in.

Additionally, it can be adapted to almost any welding position and base metals are automatically pre-heated due to the nature of the method.

Drawbacks to this welding method include increased splatter and an inconsistent arc. And though pre-heating occurs, the joint undergoes no post-heating, which subjects it to increased residual stress.

We’ve already covered some basic rules for forehand welding. In the list below, we’ll also cover some tips for how to achieve the best weld possible. These aren’t guidelines like in the previous section, but rather suggestions that can improve your welding.

If you follow the rules listed earlier, you’ll be on your way to learning forehand welding. But combined with the tips above, you can quickly master this welding technique.

As you might expect, backhand welding is essentially the opposite of forehand welding. All of the actions (and therefore, rules) are simply reversed.

In this technique, the MIG gun points toward the weld while traveling away from it. So if an individual is welding from left to right, the MIG gun will be pointed left but moving to the right.

Some general rules for backhand welding, also known as pull or drag welding, are as follows:

Backhand welding is used significantly less than forehand welding, but is superior when it comes to welding thinner metals. This is because of the filler metal mentioned in the last rule.

Because the arc is focused on this filler metal, the risk of burn through is drastically lowered. The filler metals becomes a sort of cushion, padding out thin materials with extra metal, preventing you from burning a hole through a weld joint.

Just like forehand welding, these rules are not set in stone. They can change depending on the welder’s needs, weld material, etc.

What Are the Benefits of Backhand Welding?

Benefits of backhand welding include:

This welding technique also doesn’t require as much sliding or transverse motion. And because it produces less puddle, it has the additional benefit of using less welding rod than the forehand method.

However, one of the major drawbacks to backhand welding is that it doesn’t offer as much penetration depth. Additionally, the base metals undergo no pre-heating.

There are only three essential rules for backhand welding, all of which are outlined in the section above. However, there are many tips that can improve your technique and create more reliable welds. A few of these include:

Rules for Forehand and Backhand Welding: Wrap Up

Though you may not use backhand welding as often as its forehand counterpart, it’s still essential for every welder to understand both techniques.

Using both the rules and tips listed, you’ll be able to create strong, beautiful welds no matter which method you use.

Welding joins two or more metal parts together with heat, pressure, or both to form a joint as the parts cool. MIG Welding units require a shielding gas to protect the melted wire used to form that...

MIG or Metal Inert Gas has been used for nearly 80 years and is a favorite among new welders. A great feature of MIG welding is that it can melt different sized metals together, though it is mainly...