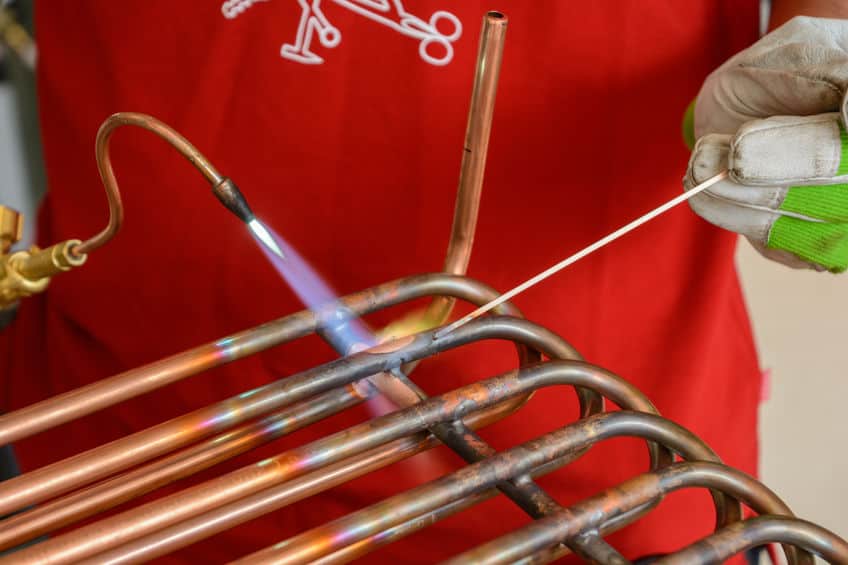 When you first start using manual TIG welding tools on your own, it’s reasonable to wonder what your new welding kit is capable of doing. This is especially true when it comes to finishing or modifying projects that were started using beginners’ welding methods like brazing.

So, can you TIG weld over brazing? TIG welding tools rarely should be used near brazing, but there are ways to work around this issue. Understanding why it’s unwise to weld over brazing can help you figure out a workaround.

Attempting to weld over brazing can harm your welding projects. Therefore it is essential to keep certain things in mind before you try to start using your manual TIG welding tools. These simple factors can make a world of difference when it comes to your potential welding results.

The Problems With Welding Over Brazing

Because of the massive temperature differences, it’s possible that trying to use welding as a joining method on top of a brazed joint can cause the brazing to melt, pop, or crack. If brazing metals near the TIG welding wires can’t handle high heats, it can cause a break or even cause physical injury due to shrapnel flying out of a welding explosion.

The risk of severe damage is particularly high for automotive projects. Auto mechanics warn against using MIG and TIG welding over brazing. This warning is due to the problems that temperature differences between the two binding methods can cause a vehicle’s structure, and in rare cases, even cause internal damage.

TIG welding works by using tungsten inert gas blow at an extremely high temperature to melt two pieces of metal together. Though the two parts of metal do not have to be the same type, there’s still only so much that TIG welding tools can do.

Brazing works by using a filler metal to “glue” two pieces of metal together via capillary action. The metals used in brazing, such as copper or bronze, are designed to have a relatively low melting temperature. If you choose to weld a joint that already has brazing filler present, the filler will melt into the nearby metals.

TIG welding does occasionally use filler material as well, but this is mostly to help address the qualities of the metal being welded and help mitigate temperature differences. Filler material that’s contaminated can decrease the quality and strength of the weld since contamination adds a high level of unpredictability to the metals being used.

Do you need to have ultimate control over the shape of your metal? Do you need to avoid metal warping at all costs? Metalworkers and welders prefer brazing when items need to prevent potential warping because this process only melts the filler metal, rather than the base metals around it.

The high temperatures associated with TIG welding mean that all the metals nearby, filler or otherwise, will be melted by the high heat. When performed by inexperienced hands, TIG welding can cause metals joints to warp or otherwise lose their shape.

Many forms of welding also produce irregular “beads” when the filler is used to join two or more metals together. Assuming that contamination and temperature risks don’t impact a project where a metalworker welds over brazing, the irregular appearance of the welding filler may still pose a problem with the project’s outcome.

With manual TIG welding tools, the heat of the welder will be powered by a foot pedal. Trying to balance the tool’s output between metals that have exceedingly different melting points requires a lot of finesse. Brazing’s filler materials will most likely melt or burn when exposed to TIG’s high temperatures, not to mention cause contamination-related problems.

Generally speaking, it’s easier, cheaper, and safer to braze two different metals together rather than weld them. As a result, it’s better to continue brazing in areas that have already been brazed before. In areas where no brazing has occurred, welding may be a better option as long as the metal types are similar.

Alternatives To Welding Over Brazing

If you have to attach more metal to a joint that was already brazed, it’s best to continue brazing as your joining method. Ideally, you will keep brazing using the same filler materials as before to minimize contamination and avoid temperature control issue.

Metalworkers who lack the necessary tools to braze pieces together still have a workaround. You cannot weld over brazing, but you can still get rid of the brazing material and weld the area anew. The easiest way to do this is to shave or file down the brazing until nothing is left, then use your TIG welder to force the two pieces into one.

People who choose this option need to take special care to ensure they get rid of all the braze fillings that are on the piece. Contaminants, even in small amounts, can harm the structural integrity of your project.

Dealing with new gaps is easy. Once the brazing is shaved off, metalworkers can use welding fillers to add volume to the missing space while they join the two pieces together.

If using buffers and files to shave off brazing doesn’t sound amenable, another option would be to cut the brazed parts out of the metal. This prevents any contaminants from harming the project, but also requires more filler or welding time to patch up holes in the project.

Choosing this route is an excellent option if your goal is to reinforce the part’s strength. Since welding creates the strongest bond out of all metal bonding methods, cutting away brazing and replacing it with welding is a reliable way to maximize a part’s strength and bond.

Using manual TIG welding tools is something that should be done with a purpose in mind and with a decent amount of skill. If you are new to TIG welding, don’t need to attach a new part, or don’t know why you want to weld over brazing, it’s best to leave the brazed area alone.

In many cases, trying to alter brazing or re-weld something will make it look worse or lose its structural integrity. Knowing that there can always be too much of a good thing, it’s best to avoid reworking parts unless you are sure they need to be touched up.

link to 7 Tips for How to MIG Weld Aluminium

Countless questions have reached me about Aluminium welding. I compiled 11 Tips for TIG welding Aluminium in a previous article. However, getting an extra machine or learning an additional process...

Continue Reading
link to Is Welding a Good Career? 6 Reasons You Should NOT Become a Welder

College tuition prices continue to trend upward, and many young people are considering alternatives to the traditional college route. As trade schools become a more popular option, many people are...